The history of the DiMare companies began with a pushcart filled with produce on the streets of Boston more than 90 years ago. 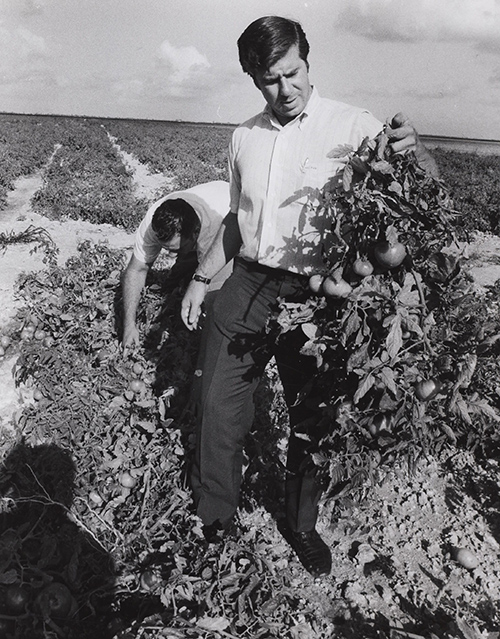 In 1928, three brothers, Dominic, Joseph and Anthony DiMare set out to create a business. Through their hard work and shared vision, they quickly outgrew the pushcart of fresh produce and opened a storefront on Hale Street in Boston. As sales continued to increase and their reputation spread, the business relocated to the Quincy Market in 1930. Seven years later, they moved their repack operations and offices to South Boston across from the Boston Terminal Market, and by 1939 the company was marketing its produce nationally. The DiMares formed close alliances with tomato growers in Florida, Texas and California to better serve the geographic needs of the emerging supermarket chains. At the same time, DiMare Brothers became the first produce company in New England to import tomatoes directly from Cuba. By doing this, they were able to provide a year-round supply for their customers. As the success of their business continued, the brothers decided they should invest in farming operations. In 1945 they planted fields of tomatoes and opened their first packing operation in Florida. Five years later, they opened another facility and began planting in the fertile fields of the San Joaquin Valley town of Newman, California. The Florida operation expanded into Ruskin and Immokalee, Florida. The company also planted fields and opened packing operations in Indio, California and Johns Island, South Carolina.

The vision that started on the streets of Boston continues today as the DiMare companies still hold true to the same values embraced by the DiMare brothers. Hard work, integrity and excellence are at the core of everything we do throughout the DiMare companies, and we believe the determination and perseverance of the three brothers live on in the next generations of DiMare family members and outstanding associates that complete our organization today.

We are also keenly aware that growth is most successful when we hold true to our core values, while learning to be flexible and adapt to the changing world and the needs of our customers. In an effort to provide service to our customers from the field to the table, the DiMare companies began to purchase existing repack operations across the country. The first facility was purchased in Tampa, Florida in 1989 and two additional facilities were added in Los Angeles and Sacramento, California in 1999. In 2003, the company established a nationwide network of repack distribution facilities with the creation of DiMare Fresh and began to service out of additional locations across the United States. DiMare Fresh now owns and operates facilities located in California, Texas, Pennsylvania and Florida.